In this proposal, we present the Vesta Reference Rate to replace the redemptions feature on the protocol. We will also soon introduce the Vesta Safety Vault.

The redemption function was intended as the main mechanism to defend peg by allowing holders of VST tokens, including those who have purchased VST in a secondary market, to redeem the stablecoin for the underlying collateral, even though they are not the primary borrowers.

When VST is under the $1 peg, redemptions provide a way for users to arbitrage the price of VST back to $1. Redemptions are first exercised against vaults that have the lowest collateralization ratios. This means that if User A has the lowest collateralization ratio at the time of a redemption by User B, then the vault created by User A will be impacted, such that the loan will be repaid by an amount equal to the redemption amount of User B, while the collateral will also be reduced and transferred to User B in an amount equal to the redemption amount. In other words, other VST holders are able to pay off someone else’s VST loans and take their collateral.

You may learn more about redemption here.

While this effectively improves the collateralization ratios of vaults that are close to being liquidated, it essentially alters the borrowers portfolio by enforcing the liquidation of their collateral even though they satisfy the minimum collateralization ratio (MCR) requirement. Hence, redemptions impact the borrowers in the system by changing their balances, adding uncertainty and severely undermining user experience, as this defeats the purpose of allowing borrowers to maintain an intact exposure on the collateral asset should they meet the protocol’s borrowing requirements.

Moreover, in the case when the stability pool is empty (i.e. the pool of VST tokens that is used to settle vault debts during liquidations) or becomes empty due to liquidations, every borrower will be credited a portion of the liquidated collateral and debt of the vaults that have become eligible for liquidation. Again, this can significantly alter the collateralization ratios of all remaining users. Thus, even though users may be obtaining a small gain in terms of the new collateral relative to the new debt they are being credited, they are now responsible for a larger debt amount, which might be outside of their risk tolerance.

We have already taken steps to mitigate the impact of redemptions on the system. Previously, the redemption fee was at 0.5%. As Vesta onboarded more collaterals, lots of users started utilizing Vesta as a platform for leverage, effectively repeating the process of taking out loans and then selling the loans to acquire the collateral again. While such an activity bootstrapped a sizeable portion VST origination, it also puts VST under severe selling pressure, pushing VST below the peg. Since then, we have changed the redemption fee to 2%, making redemptions unprofitable unless VST goes below $0.98. However, this was only meant as a temporary solution as it now effectively puts VST at a peg of $0.98. We are now proposing novel developments to bring VST back to peg: Vesta Reference Rate and Vesta Safety Vault.

Update Nov. 3, 2022: the below still provides context but the final model is updated. For detail on the latest model please view the bottom of this post where the models are linked.

We introduce the Vesta Reference Rate (VRR) as a mechanism to replace the current redemption model as a price stabilizing framework.

As part of this new proposal:

Equation (1) can be re-written as:

where \Delta P_{0} = log(I)/C , and represents the deviation from the peg that results in a half-maximal rate.

The initial model parameters that will be used are as follows:

The above parameters will give the following baseline VRR. 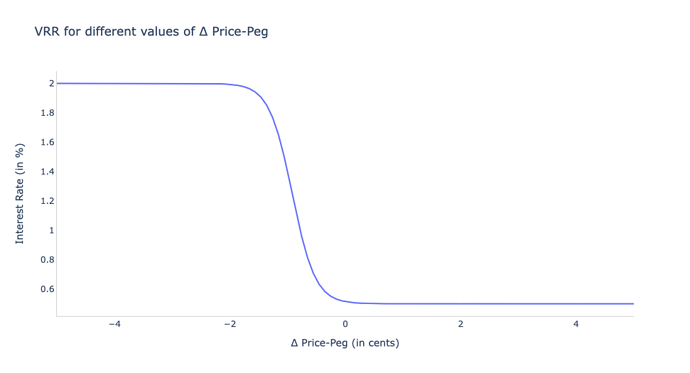 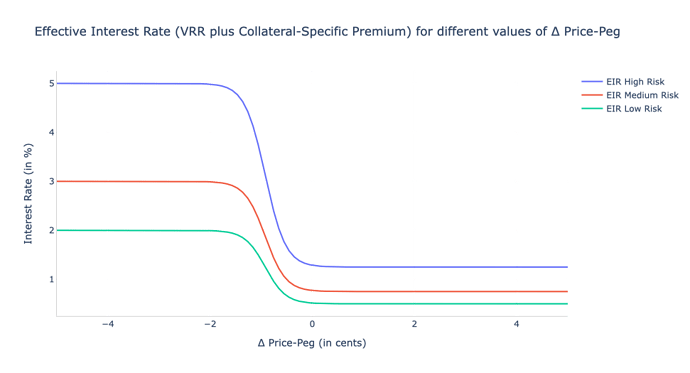 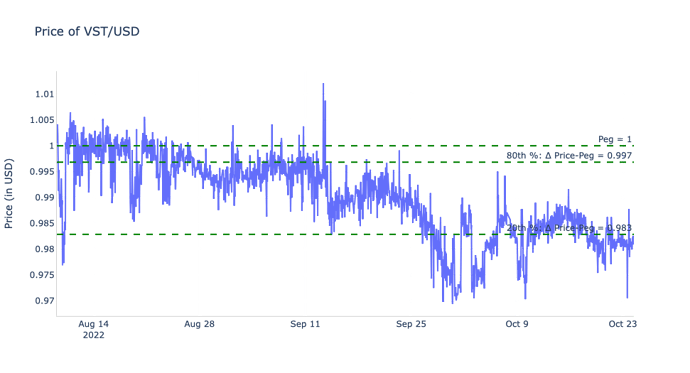 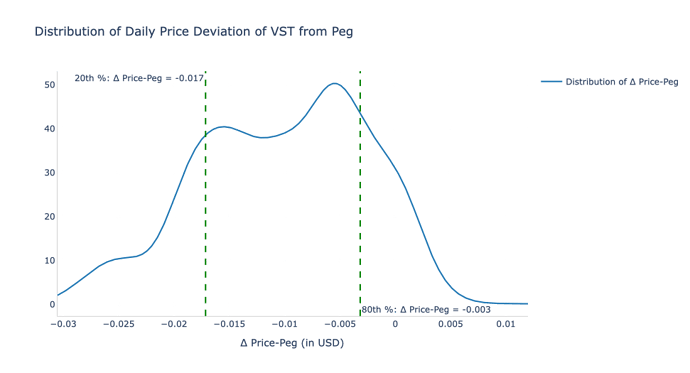 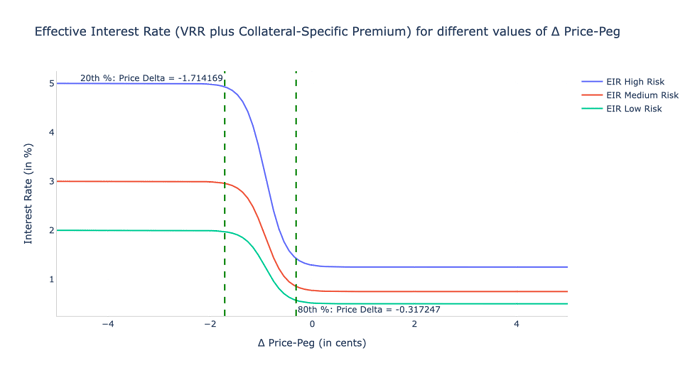 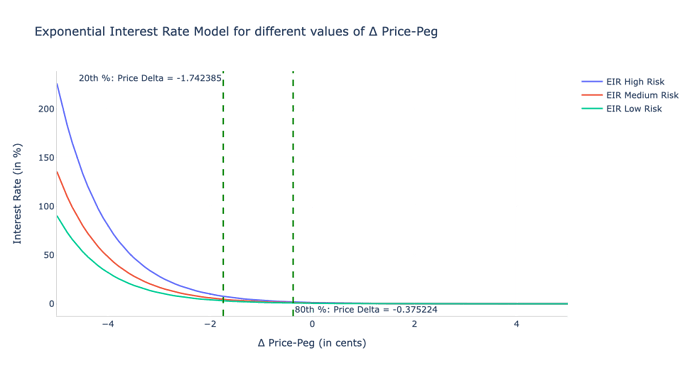 Vesta Safety Vault will be a place for people to deposit VST and thus achieve the goal of taking VST off-market, playing an instrumental part in Vesta’s monetary balancing. We are still in process of drafting this feature so please keep an eye out for a new proposal on this soon.

The (\Delta_{Price-Peg}, EIR) coordinates for the three collateral type models are:

We hope to solicit feedback on this proposal for 7 days before putting this through a vote. Our engineers have already started looking into implementing this model. The voting stage will last for 72 hours.

Thanks for very well-thought-out and detailed proposal, I think I’m overall in favor of the presented changes.

One thing I’d like a little more information about is the collateral-specific rates. Are you able to say specifically which assets will fall into which category? Some assets (GLP) already have a fairly significant admin fee on their yield; would this be taken into account when choosing their EIR?

Also I know there will be a separate safety vault proposal later, I just want to put it out there that an interest-bearing token (iVST?) would be pretty nice to have rather than a static vault contract of some sort.

Hi everyone, that’s a great proposal.

I would like to see bit more information on how collaterals will be classified into risk groups. For example, what determines the risk of a collateral: is it its price volatility, the % of VST minted against it?

where ΔP0 = log(I)/C. I think as it stands parameter I is difficult to interpret, whereas ΔP0 has a clear interpretation (ie deviation from the peg that results in a half-maximal rate)

Thanks for all your comments! Below I’ll reply to a couple to points.

One thing I’d like a little more information about is the collateral-specific rates. Are you able to say specifically which assets will fall into which category? Some assets (GLP) already have a fairly significant admin fee on their yield; would this be taken into account when choosing their EIR?

Agree with other commenters - would love to hear more about how you plan to balance current GLP management fees with the VRR. If the initial parameter adds 2% interest rate, and then an additional 3% because it’s considered ‘risky’ collateral plus the 20% fee on glp yield + treasury currently keeps all esGMX rewards…
2a. IMO if the protocol is going to start charging interest rate across the board, GLP should be treated just like any other collateral… keep the esGMX yield and additionally charge only the VRR + collateral-specific premium.

From a strictly technical perspective, the performance fee applied on GLP is a fee applied on the “staking” part of the protocol. Vesta’s staking feature is unique and not offered anywhere else at the moment. The upcoming interest rate is concerned with a totally different subject, which is managing supply of the token relative to the peg.

However, we hear your concern loud of clear. The team recognizes how the interest fee may render the product unattractive especially during times of de-peg. After a long discussion, @token_master and I have concluded it would be reasonable to lower the performance fee to 10% as we push out the interest rate module.

Also I know there will be a separate safety vault proposal later, I just want to put it out there that an interest-bearing token (iVST?) would be pretty nice to have rather than a static vault contract of some sort.

As we wrap up the design of interest rate and hand the project over to engineering for implementation, the research team is now spending majority of our efforts on devising the new vault and the staking module (or the staking module with the vault in it?!). I’ve personally not found any good reason for tokenizing a vault deposit if we set one up. Would appreciate it if you could elaborate a bit here.

This is yet to be determined. I would assume something like a 60-40 or 70-30 split would be used, with the majority supporting VST related vaults and the minority going to support the governance token.

This should come with auxiliary mechanisms, that would be able to absorb back the VST that is minted due to the negative interest rate.

Intuitively, it feels to me that the interest rate should spike even more below -2 cent peg, as the situation in -5 cents peg is much worse than the one with -3. Is this just an illustration and different max and min value would be able to take care of it?

The collateral-specific premium is also calculated using Equation (1), such that a dynamic premium is added to the VRR for different price deviations from the peg.

@mv_kr you are correct. The modified function will yield exactly the same result, but may be interpreted more intuitively by users.

I will add also the modified version of the function. 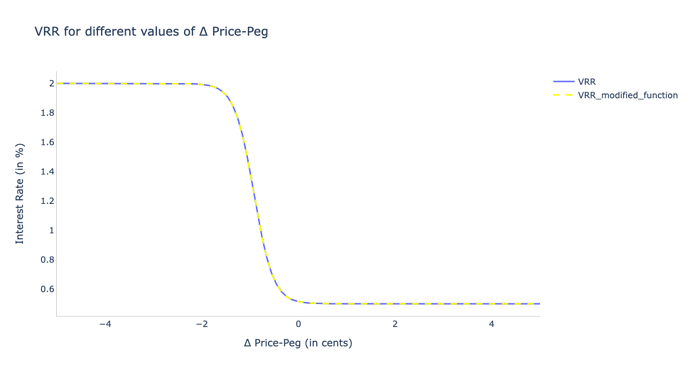 This is the case as per the current proposal. We will charge an interest rate whether the price is below, at, or above the peg as the user is effectively borrowing VST no matter the market price. However, the rate will be higher when the price is significantly below the peg in order to encourage borrowers to purchase VST and pay back their loans, thus pushing the price back to peg.

UPDATE: An Exponential Model Alternative for the VRR. 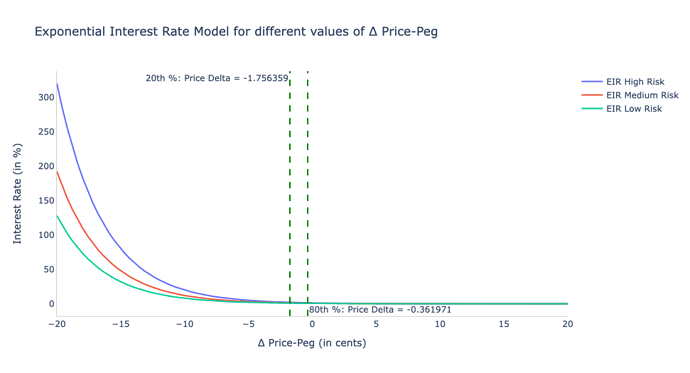 With the new interest rate curve, there is a non zero interest (aka fee) also when the price is fully pegged.
This is fine if intentional, but might deserve a more in depth or separate function on how the interest rate function should like like.
Unless the plan is to have this discussion later, and then just to add the EIR on top of it. If this is the case, you might want to normalise the EIR so it will be 0 when delta P = 0.

There’s indeed a base interest that’s being charged even when the token is at peg. You can see the correlating interest rate at the table from @token_master ’s latest comment. These are in place to account for each collateral’s inherent risk and it’s subjected to governance vote.

Since users who mint VST are effectively borrowing VST (regardless of the price) then there will be an interest rate that is charged. This includes cases when VST is at the peg as well as above and below.

The interest rate will be lower when the price is above the peg to encourage more minting and potentially bringing the price back. down to peg. 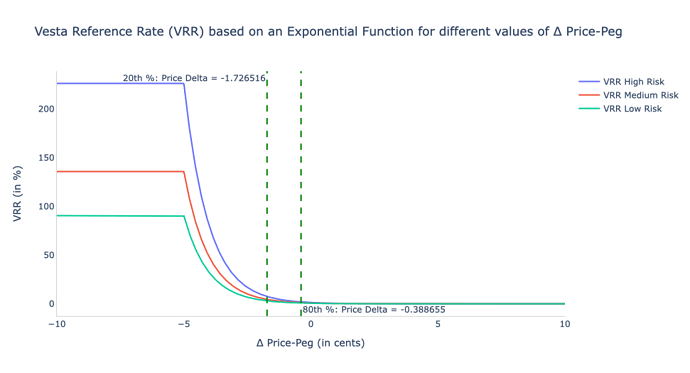